Yuneec Commercial sUAS are designed with the inspection industry in mind with six-rotor systems that allow for stable, precise flight, medium focal length lenses that allow the sUAS to fly at greater distance from an object and data storage to SD card in 4K/2K/HD video or 12Mp still images, and transmit to ST16S Ground Station in 720p video link resolution.

Yuneec camera payloads are interchangeable and hot-swap capable, offering time-saving convenience for the
commercial operator by not requiring a power-down restart of the sUAS system. This also allows consistency of data-storage,
rather than using multiple storage devices and locations. Whether it’s thermal imaging, long focal length,
or wide focal-length data capture, memory cards may be swapped from device to device. 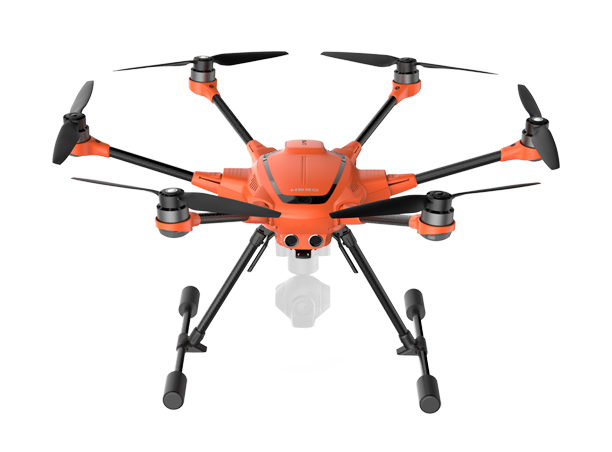 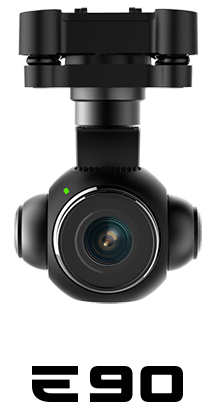 The E90 camera is a wide-angle, high resolution, gimbal stabilized imaging system perfectly suited for use in applications that require high quality photos and video. The E90 utilizes a 20 MP 1 inch sensor and the latest H2 high speed image processing chip. The E90 is ideal for law enforcement applications such as accident recreation, search and rescue operations and for 3D mapping/modeling. In addition, broadcast and production professionals will appreciate the dramatic aerial shots afforded by the E90’s high frame rate and accurate color.

Thermal imaging is achieved with the dual-imaging solution for UAV use. The CGOET simultaneously records two separate video files for each lens. It is also designed for low-light scenarios with the ability to see 20X better than the human eye in identical environments. 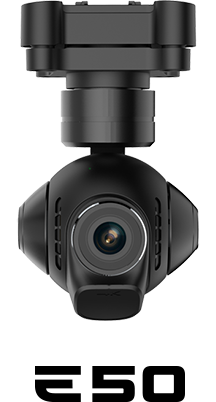 The E50 camera is a medium focal length, high resolution, gimbal stabilized imaging system perfectly suited for use in inspection or cinema applications. The E50 utilizes a high aperture 1/2.3 inch CMOS imager that is capable to capture still images with 12 MP resolution. The E50 is ideal for critical inspection of cell towers, wind turbines, oil & gas platforms and other vertical assets. The 40mm equivalent lens enables the E50 to capture important visual detail while maintaining a safe distance from the asset. Broadcast and production professionals will appreciate the cinematic effect afforded by the E50’s 40mm prime lens equivalent focal length. 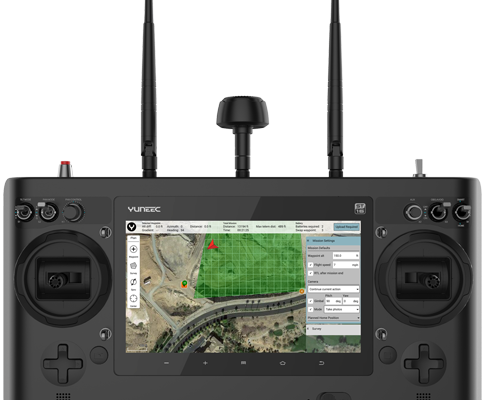 The ST16S Ground Station is an all-inclusive transmitter and receiver that
gives you full control over the H520 during flight, allowing users to capture
photos and video with great ease. With a large 7-inch integrated screen, the
Android-based ST16S controller displays real-time footage of your flight,
eliminating the need for an external device. You can also use the ST16S as
a mission planner. Plan your flight using the touch screen, and execute your
mission with just a single press of a button.

View real-time footage in HD 720p on the screen of the ST16S transmitter with the integrated digital video downlink with a range of up to 1 mile (1.6km). Want to output your live video to a larger monitor? The ST16S includes a convenient HDMI out to enlarge or share your on board data.

The new Android-based ST16S is equipped with a powerful Intel™ Quadcore processor and has sufficient processing power for the new included high-performance flight apps. The low-glare 7” LCD display with improved touchscreen ensures accurate, intuitive control of the H520 and shows you all flight information as well as the live video feed from your camera in 720p HD. The ST16S Ground Station also has an HDMI output, supporting the use of additional monitors without compromising image quality.

The included DataPilot™ app is a complete software solution for planning waypoints and survey missions. The app is fully integrated into the hardware and software of the H520. The DataPilot™ software system enables users to efficiently and consistently create orthomaps, 3D scans, crop data imagery, or cinematic movement for repeatable, recallable aerial flight paths, without requiring expensive 3rd party software. Surveys, construction measurement, BIM components, perimeter security, accident scene reconstruction, forensic captures, 3D scans, orthomosaic, photo-stitching are generated with precision and efficiency via the DataPilot™ interface. Missions/flights may be stored for later recall/reflight, or planned off-site and transported to the control system via email, thumbdrive, or micro-SD card. DataPilot™ auto-generates survey paths with user-defined overlap/sidelap, and cross-hatching for precision 3D or large format image output. Users may define a survey resolution via altitude or inch-per-pixel decisions, providing a platform that is capable of flight even in low altitude scenarios. DataPilot™ also allows for storage/caching of maps from many map providers for access in areas with no internet connectivity, and provides tools for precise waypoint placement even in areas where no updated maps are available.

The included DataPilot™ software on the ST16S allows you to schedule, store and modify missions at any time. You can decide whether you want to do this on site or at the office. Thanks to the offline map cache, you can also work out in the field without internet access.

In order to be able to monitor events or accidents from a stationary viewpoint over a long period of time, it is now possible to power the H520 indefinitely via a tethering system (available separately). The operator is able to share the HD video feed from the H520 to additional monitors/outlets via the HDMI output on the ST16S. Using the HDMI output the operator is able to set-up mobile service centres, or the live signal can be used for TV productions. 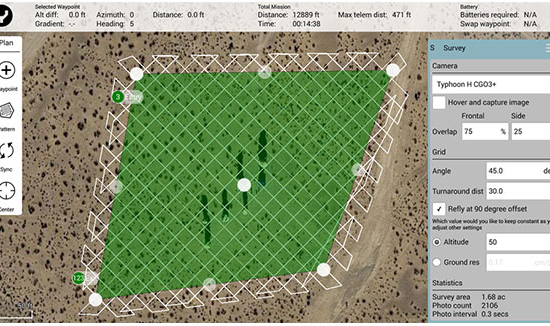 Harness the power of Yuneec SDK

Yuneec offers power users and software development teams a Software Development Kit/SDK that enables developers to tap into the power of the Yuneec hardware and software tools. These development tools allow the creation of applications in collaboration with the H520 UAS, adding to a robust software and hardware package.

Berkley Analytics was founded under
the need for business and people to
have a more connected life.